ITâ€™S Labor Day weekend, so letâ€™s talk about labor. (Capital absorbs our attention most of the other 364 days of the year.) 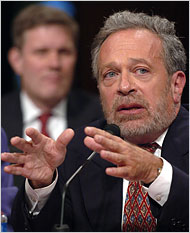 Around 140 million people are employed in the United States. They are engaged in work like governing, manufacturing, health care providing, retailing and researching (as well as suing).

This gigantic army of laborers, argues Robert B. Reich, has morphed into a nation of consumers and investors, rather than citizens. â€œSupercapitalismâ€ (Knopf, $25), his 11th book, seeks to explain why this supercharged economic system is a civic problem, and what can be done about it.

Mr. Reich, who teaches at the University of California, Berkeley, does not rip into opaque hedge funds and demand their regulation. Nor does he harp on lax government regulation of credit and mortgage practices. On the contrary, he criticizes many of the usual liberal fixes directed at the â€œexcesses of the market.â€ His book is smart and compelling, if ultimately toothless.

Born in 1946, Mr. Reich served as labor secretary under President Bill Clinton, the avatar of the have-it-all baby boom generation. Equally significant, though, is that Mr. Reichâ€™s government service dates back to the administrations of Gerald R. Ford and Jimmy Carter â€” that is, to the 1970s, the decade when Americaâ€™s immediate postwar economy, a middle-class bonanza like no other, began to give way to todayâ€™s upper-class bacchanalia.

It was during what Mr. Reich aptly calls the Not Quite Golden Age, from 1945 to 1975, that America prospered, income inequality fell and most people trusted in government. Then, thanks to technologies like shipping containers and the Web, companies suddenly confronted brutal competition. After that, there was no going back.

Consumers got more choice and lower prices, while the people on Main Street became investors. Together, newly powerful shoppers and shareholders of this supercapitalism drove a decline in labor unions and a frenzy by corporations desperate to buy some market advantage in Washington.

â€œYou and I are complicit,â€ Mr. Reich writes. Our â€œgreat dealsâ€ are somebody elseâ€™s lower pay and some corporationâ€™s lobbying.

We are hypocrites, too, he says.

One of the bookâ€™s examples of consumersâ€™ hypocrisy has to do with canned tuna. J. W. Connolly, former president of Heinz U.S.A., which was the parent company of StarKist, explains that â€œconsumers wanted a dolphin-safe product,â€ but â€œif there was a dolphin-safe can of tuna next to a regular can, people chose the cheaper product. Even if the difference was a penny.â€ The company terminated its higher-cost effort to protect dolphins. After all, itâ€™s a business, beholden to consumers and shareholders.

With such vignettes culled from the news media, Mr. Reich disembowels proponents of corporate â€œsocial responsibility.â€ He shows that companies like Wal-Mart are operating legally yet being shamed into incurring social costs that their competitors are not. Criticsâ€™ campaigns are a misleading diversion, he argues, because they confuse businesses with what they can never be: public interest bodies.

Public-relations skirmishes are no substitute for democracy. The ritual scolding of corporations in front of Congressional committees, Mr. Reich says, goes hand in hand with Congressâ€™s failure to pass follow-up laws that reward businesses for safeguarding the environment or walking away from deals with serial human rights abusers.

Washington is all about the money, he writes. In 2005, the Census Bureau listed seven suburban counties around the capital as among the 20 richest in the country. And itâ€™s not just Republicans cashing in on their service. â€œUpon leaving office,â€ he notes, â€œmore than half of the senior officials in the Clinton administration became corporate lobbyists.â€

Would-be analysts of this trend, Mr. Reich says, have it backward; government is not historically bigger now, relative to gross domestic product, and politicians are not more corrupt. Rather, market competition is greater, which means that public policy contests â€” over organic labeling, for example â€” have more than ever become just brawls among business rivals.

Here, however, we arrive at a cul-de-sac. Mr. Reich argues that the â€œmost effective thing reformers could do is to reduce the effects of corporate money on politics and enhance the voices of citizens.â€ But he also writes of the lock that corporations have and how â€œthe system cannot repair itself from the inside.â€

So he opts for consciousness-raising. The public and the media, he writes, must understand the obscured truths laid bare in his book and demand change. In passing, Mr. Reich comes out in favor of decoupling health insurance from employers and raising the minimum wage to about half the average workerâ€™s wage. He mentions runaway C.E.O. pay but offers no prescriptions.

Capping executive compensation is liable to be rejected as un-American, which it is. So hereâ€™s my suggestion: a legally binding maximum on C.E.O. multiples of their own workersâ€™ salaries. Letâ€™s pick a multiple of 300, well above the historical average. If chief executives want to be paid hundreds of millions, and boards comply, no problem; the C.E.O.â€™s task would be to figure out how to pay the companyâ€™s lowest worker hundreds of thousands.

That would be supercapitalism. Chief executives could devote their formidable talents to raising the skills and living standards of loyal work forces and avoiding the huge self-imposed costs of labor turnover, rather than gaming quarterly reports. Shareholders would remain empowered to invest or divest based on performance.

A lot of American businesses are already well in line with the proposed pay multiple. Companies that insist that they could never compete under the mandated guideline would have an option: look abroad for a cheaper C.E.O.

To provide an incentive, Congress could enact one of Mr. Reichâ€™s best-argued proposals: elimination of the corporate income tax. But only for companies in compliance with the pay-scale multiple. Happy Labor Day.